I'll be away from the computer and radio between 1300 and about 1630 UTC, so if anyone wants to schedule a test during that time, please post it on the HF Underground on the Broadcast Announcements page.

I checked the Twente tuner, but not much was happening in Europe, either. Radio Batavia was making a Global HF Weekend broadcast on 1620 kHz, so I helped make it global by tuning in:

1620 UTC: I'm back to the computer and radio. I'd heard from one station who was planning to be on at 1500 for a high-frequency test and another station who had planned to be on in the morning (EDT), but nothing has been on. I guess the station ops' plans changed.

1849 UTC: A station set up a test for me on 13870 kHz and if everything worked out, I had planned to announce it. But as he was tuning everything up, something failed and threw the breaker in his house. So, that station is off the air for today (and I hope that it's an easy and inexpensive fix for the station op).
Posted by AY at 4:54 AM 5 comments:

Although I have not been receiving schedules or seeing schedules posted online thus far, I do see that some stations have been already been active and successful. For example, Radio Pirana International from South America was reported in North America last night. I could hear the carrier, but not get any audio. I was asleep at the time, but Captain Morgan Shortwave was on after 0600 UTC on 6950 kHz and the signal was reported in New Zealand! [update] I saw that FOUR North American stations were reported in New Zealand last night at 0600+ UTC: 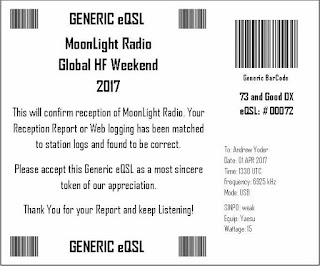 1430 UTC: Cupid Radio said he's on 15070 kHz. I'm listening right now and I've got something mixing with the 15072 noise. Not yet sure if it's Cupid, a computer noise source, or maybe a spur or receiver image

Cupid Radio: 15074, 4/1, 1440+ Cupid Radio (ID per op) starting to fade in here, with a YL vocal pop song. I've got some local noise on the freq, but others in North America should be able to hear it well. I've had a few very nice fade ups and I hope it'll keep getting better. 1508 UTC, yes, it does seem to be getting better!

XEROX: 6929, 4/1, 1449+ Reggae music, recording from a licensed station. Annual April Fool's Day broadcast. Excellent signal. DJ talking about the countdown. Up to #30, then cut to XEROX IDs & into what sounds to me like Andean folk music. Bart Sambo with Belfast USPS address and e-mail address

BTW, here's a clip of a Cupid Radio broadcast from the last Global HF Weekend (Nov. 2016):

1755 UTC: A couple of Twente web receiver loggings while I paint the hallway & put up some drywall: 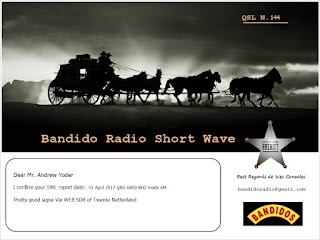 2000 UTC Update: I finished sanding drywall compound on the ceiling, then swept up twice. Back at the radio now. It appears that the signals are starting to skip long in Europe. If some of those stations will just stay on late, we've got a chance to hear them.

2220 Update: I have a carrier on 6210 for Borderhunter, but no audio. I have just a little audio on 6220 for Laser Hot Hits, but I doubt I can copy anything yet. Fortunately, I am hearing something:

Captain Morgan SW: 6375, 4/1, 2320+ Twilight Zone theme, Paul McCartney "Band on the Run." No IDs, but based on the TZ theme, I'm guessing that this is Captain Morgan. Just checked the Twente receiver & it's still too early for the signal to reach Europe. A whole bunch of computer-voiced IDs at 2325, then off 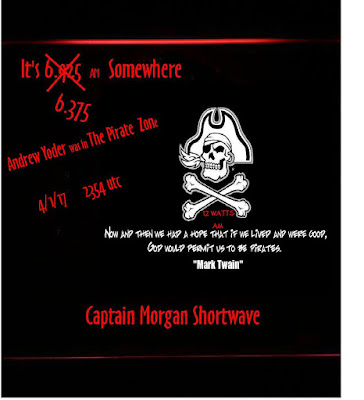 Radio Pirana International: 6930, 4/1, 2340+ weak carrier here, but maybe audio will come through later in the evening. Online, the station op said that he's received reports over the past week from US, New Zealand, Germany, & Finland! Only 10 watts.
Posted by AY at 4:51 AM No comments: