Last night, I was working outside, scraping and painting the house. I don’t remember why I needed to go inside (maybe to take our dog back inside because she was barking at people walking down the road?), but I did. When I went inside, I checked HF Underground and saw that Skipmuck in Massachusetts was hearing the European pirate Radio Cuckoo and IDing a number of songs, so I thought I might have a shot. I ran up to the radio, locked in on the signal and managed to ID one song after fighting through static and the drone of my receiver’s drifty sync lock.

Radio Cuckoo: 6240.3, 4/18-19, 2342-0042+ Really tough copy, but some signal was audible throughout. In many cases, all I could hear was a beat, but I had Gary Numan "Cars" fade up nicely. In the last 30 minutes, it seemed to be fading away, but then it came back for a really nice fade up. Also heard an announcement and possibly an ID and e-mail address. I sent a reception report with a couple of audio clips to the station today and received a nice e-mail and eQSL back. Power is between 40 and 50 watts, and the station is working on a much more powerful transmitter. When that happens, it should be audible across much of the East Coast of North America. 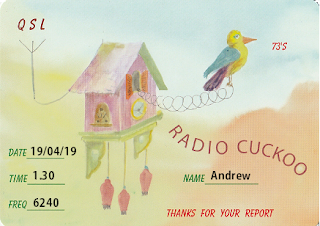 Also, I received this e-mail from Skyline Radio Germany, which was popular a few years ago. Unfortunately, those times and frequencies mean that it won't be audible in North America. But, thanks to the modern world of the Internet, it's possible to listen via an online receiver:

After a long time of absence - WE ARE BACK ON THE AIR!

Shortwaveradio.de kindly gave us the possibility to be on air with
our shows via their transmitter located somewhere in Northern Germany.

If you would like to try to catch our programmes, six hours,
on April 20th, 2019, Easter Saturday afternoon local (15.00 - 21.00 UTC)
would be a good time to give us a listen.
Try the 75 metre band shortwave on 3975 kHz!
Let's keep fingers crossed for no geomagnetic storms!
If propagation conditions should be bad the transmission
will be postponed until further notice.

It might be a good chance for you to catch our special eQSL-card.
We look forward to your reception reports and comments to:
SKYLINE RADIO GERMANY, P.O.Box 2702, 6049 ZG Herten, The Netherlands
or via e-mail to: skylineradiogermany /at/ web.de

Have a great time with us and Good DX,
DJ Jan-Hendrik
SRG - ALTERNATIVE MUSIC SHORTWAVE RADIO
Posted by AY at 8:21 PM