At noon today, I hopped onto HFU to see if anything interesting had happened over the weekend. There, I saw the stunning news that Alfred Zoer of Alfa Lima International had died at the age of 46 on May 21.

It's been about 10 years since Alfa Lima International was on the air on a regular basis, so I'd imagine that a number of listeners these days don't know who Alfred is. Alfa Lima was originally an 11m outbander station. In 1998, Alfred made his first broadcast on shortwave. From this point through 2005, Alfa Lima International was one of the best-heard shortwave pirates around the world. Over the course of those years, ALI sent out more than 1200 QSLs.

ALI was a trendsetting station. Although Radio USA and Live Wire Radio had used 13m in the early '90s, Alfa Lima was the first to do it on a regular basis. He was so successful on those frequencies, thanks in part to his Rohde & Schwartz SK-050, being reported in North America nearly every weekend for weeks at a time.

To put this service into perspective, still one of the best pirate signals I've ever heard was from Alfa Lima International on 13 meters. In the fall of 2001, I went out to a baseball field in the afternoon to roll up an antenna that I'd left out from the night before. While I was checking, Alfa Lima came on the air and the signal was so strong and clear that it literally sounded like Alfred was in the next room. There was no noise whatsoever and I could even hear background sounds in his attic studio.

For a comparison of operation types, ALI was very similar to Cupid Radio, except even more active.

Back in the late '90s, the FRN was one of the only pirate websites around. Alfred was active there, but he decided that Europe needed a general pirate forum, so he created www.alfalima.net, which is still active today.

Alfred was extremely open about his activities and he frequently signed his QSLs as "Alfred" or with his full real name. In fact, he set up a webcam on alfalima.net and whenever he was on the air, the webcam was showing it. I remember seeing his toddler in the studio with him. For a look at the Alfa Lima studio when the station was on the air, here's a video that Alfred posted to YouTube years ago.

I have more to say about the station--especially if I had more time to look up some information.

I e-mailed Alfred a number of times in the years that he was active and he was always friendly and helpful. About a month ago, I was thinking about him and wondered what he was up to. I looked him up on Facebook and it seemed like he was doing well, showing plenty of happy photos of him with his daughters and also some of his muscle cars. I was thinking that it was great that he was doing well and that I'd have to drop a line to him sometime.

It's too late to drop a line to him now and I regret it. My lesson learned is: when I think it's a good time to say hi to someone, I need to do it. 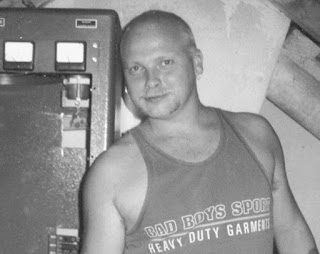 Goodnight Alfred. It was a lot of fun.