Last weekend was pretty awesome, but we did have a huge snowstorm. Wonder what this weekend will bring?

Liquid Radio: 6925.2, 1/30, 0023+ Ambient synthesized dance music, fair/weak signal but heavy pescador QRM ("hola, hola, hola, hoooooooola"). Heard an ID about 15 min ago, but the pescadors are messing the signal up a bit too much to really be able to enjoy it

Channel Z: 6925, 1/30, 1445+ SIO:555 Another excellent edition of Before They Were Famous (Part 6) with Andy Walker: The Sorcerers, ? (a band with Stevie Nix & Lindsey Buckingham), The 31st of February, Mott the Hoople. e-mail address, BRS address--only postal reports get hardcopy QSLs. Andy says that he might be seeing you at the 2016 SWL Winterfest.

6945, 1/28, 1900+ Turned on the radio to hear me stammering through my talk at the last HOPE Conference. My public speaking is abysmal, but a lot of people seemed interested in hearing about shortwave and weird stuff on the band, so I guess it was a success in that respect. Not sure if that translates to radio rebroadcasting?

1648.7, 1/28, 1530-1538* Looks like someone's playing with a transmitter here for about the past 15 min. or so. I see a carrier (but I haven't heard audio on it). But the carrier sometimes bounces around a few hundred Hz. I don't think the freq's intentionally being moved. Heard some weak voice audio, so I think the operator was trying to get his voice to register, before pulling the plug

1625, 1/28, 1605+ Schlager. Male announcer. Sounded like he said "Radio Armadillo," but I think that's a UK SW station, so I dunno what I heard. I guess I should either learn Dutch or listen to some other frequencies for a while!

1430, 1/28, 0430+ Cathloic programming & an ad for Notre Dame Federal Credit Union. I thought maybe this was from around South Bend, IN, but the only 1430 that I could find from IN is all sports. Maybe this is WNSW, a Catholic station from Newark, NJ?
Posted by AY at 3:31 PM No comments:

Just messing around a bit with the radio, checking noise levels on lower frequencies. There's a LOT of wide-open space on 120 meters for people to be broadcasting. Everything that I heard between 3200 and 3500 kHz is listed below (along with some other stuff)

Radio Verdad (Guatemala): 4055, 1/27, 0139+ Noted in passing with presumed sermon or Bible lesson, into old-style organ music with lots of vibrato and woman with announcement. Good signal
Posted by AY at 5:53 PM No comments: 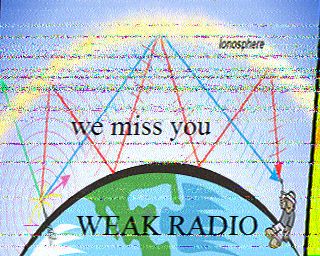 I was planning to get some loggings up later on, but there's so much activity right now that I can't keep up with it all with just one receiver/recorder running. Yeah, I know, I need to get more decent antennas up so that I can record on a couple of different receivers at once.

Radio Azteca: 6900, 1/16, 1930 Heard Bram Stoker talking. Pretty good signal, but I was heading up to start recording one of the next two.  Off when I tuned back through after the 6967 unid signed off.


Cold Country Canada: 6969L, 1/16, 2120- Good signal. "Do the Hustle" into Led Zeppelin. Interesting combination. Not sure if this is being relayed just because someone felt like relaying it or if it's a new show on the air specifically for the anniversary of the date that WEAK was closed (2/15/11). Off or faded out after a WEAK repeating ID.

Radio Illuminati: 6150, 1/17, 2223+ A Duran Duran song in heavy fading. I need to go back over the recording. Nice levels and audio when the fades were up

Nice to be hearing a little activity tonight, though I've mostly been away from the radio