Another night & I didn't hear any pirates on the receiver, but I heard a few stations on the computer via Twente. One positive was fixing the antenna mast, which had broken in two places and was hanging at half mast (literally).

Oh, tomorrow is Canada Day. Some Canadian pirates in the past have made special broadcasts for the holiday, so maybe we'll have something to listen to.

Well, I had hoped to start logging North American pirates in the blog again, but I haven't heard any over the past few days. But at least I have a few more loggings from the Twente web receiver:

unid: 1640, 6/29, 1602-1604* Instrumental song & off with no talk.Radio Merlin International: 6280, 6/29, 1833+ New wavish music. Started good, but fading out. ID per Iann's chatHit Mix Radio: 6285, 6/29, 1719+ Sounded like shoutouts in Dutch over an instrumental polka at 1722. Telephonic-sounding canned ID at 1730. At 1731, I think DJ said "Hit Mix Radio live 6-2-8-5!" Off by 1830 check6320, 6/29, 1833 Lots of polkasMarconi Radio International: 7700U, 6/29, 2001+ music, sign on announcement with IDs and talk in a few different languages. Star Wars theme. E-mail address as marconiradiointernational@gmail.com. DJ came on in English with talk about the upcoming show. I think he said the show was via IBC? Hi to a number of listeners including David Baroni & a few from Japan. Into a shortwave DX information program at 2006. MRI reminds me a lot of some of the smaller SWBC stations from a few decades ago that would combine news, DX, and something cultural almost seamlessly into a 30-min. program. Hope MRI shifts the times occasionally so that we can hear it in North America directly.
Posted by AY at 8:26 PM No comments:

I listened just a bit this past weekend via my own receiver & managed to hear Girl Scout Radio & Pirate Radio Boston. Those logs were so spread out, though, that I just didn't put a weekend log post up. But I listened a bit on the web today . . . most of these stations were playing Dutch music and announcing in Dutch, so these are light on details: 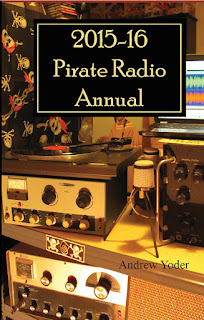 Cabinet Communications
PO Box 109
Blue Ridge Summit, PA 17214
or  you can send the $ via PayPal to info /at/ hobbybroadcasting.com
Posted by AY at 8:26 PM 6 comments: