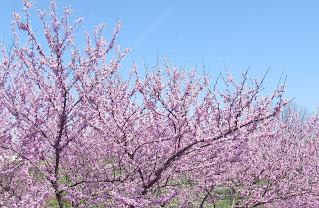 No, the photo doesn't represent anything in particular. Just nice to see Eastern Redbud in full bloom, swarmed with pollinating bees.

As I was just starting to type this entry, I saw that Elon Musk officially bought Twitter. Crazy times we live in. I had made comments that I thought we were in an era of corporations guided strictly by accountants, who slowly made decisions that would only help the bottom line. Nope. It seems that Elon Musk (Twitter), Jeff Bezos (Washington Post), Mark Zuckerburg, and others are the Tesla, Edison, Sarnoff, Armstrong, etc. of the 21st century.

Also, it's interesting to see that people are now following Radio Europe closely enough that 5835.2 is now marked as "UKR Radiostatsiya Evropa" on the Twente web receiver. I'm not sure if I've seen any other pirate marked on that site.

Saw that WRLY was relaying WEHM this afternoon, but I missed it. Not sure that I would've heard it anyway because I'm getting a lot of interference here during the daytime now; think it might be the neighbors' solar panels, but I haven't walked around with a portable to see.

The station yesterday (I assume Mix Radio International) on 6875 that moved to 6960 kHz had an incredible signal. Hours of classical and opera music with no IDs. Saw it was logged directly in Bermuda and France, and the signal was perfect here for hours.

Radio Columbia: 1640, 1935-1948* Perfect signal there on 1640 kHz. A number of IDs and talk in both English and Dutch. Lots of Dutch instrumental songs, but now a light rock song about the rain coming down in English.

Radio ?: 1642, *1648-1653* Lots of Dutch instrumental radio production music. Dutch talk, with many mentions of  Radio Columbia. To me, the ID sounded like "Radio Bungamore"

A few logs from Europe via Twente

I listened to a few stations on the computer while I was working (also on the computer) today. I should've checked the radio early because someone was on in North America. Later on, I was working and occasionally checking the HFU board . . . but I forgot to check the Latin America board and Radio Cidades was heard with good signals in New England, Alaska, and France on 10230 kHz around 2300 UTC!

unid: 4625, 1400+ Music being aired on UVB-76's frequency. I assume this is a jammer, but presumably from Western or maybe Central Europe because it had a good signal, but UVB-76 wasn't audible at all.

1621, 2110+ Polkas & schlager. Male announcer sounded like he mentioned "Marianna" a lot, so I assume he's QSOing with the Marianna op. I couldn't understand his ID

1646, 2125+ Polka-ish song "Little by Little." Levels are varying a lot and sometimes they were really distorted, such as during one annoucement

Mike Radio & Mix Radio International being heard across the Atlantic

Getting this up quickly in case anyone sees this message & checks it out in time: 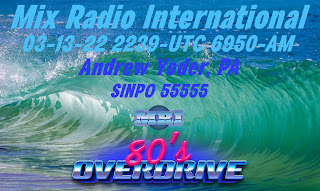 Mike Radio: 5841 (via Twente) and 15080 (on my own receiver), 1645+ Excellent on Twente web receiver with "Angie." Announcement with both frequencies. 15080 is intended for Eastern Europe, but I heard a decent carrier on 15080, and even some occasional audio. First I've heard Mike Radio with my own radio in a few years. I'm recording it from my R8, but casually listening on Twente. Shoutout to me & Kinks "Sunny Afternoon," Mike Radio jingles. Said getting stronger in Australia on 15080. Said should be audible in Kiev on 15080, if anyone has time to listen. My antenna isn't that great on 19m, so I'd bet some other DXers could hear this with a better signal in North America 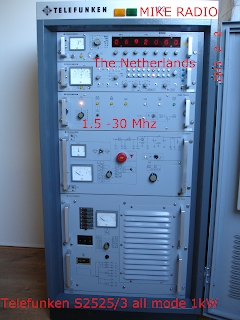