Torrential downpour here (OK, it just rained a lot), so I watched the Pirates (baseball) on TV lose again and I scrubbed out some old Pepsi bottles so that I can try my hand at making homemade root beer. But I do have a logging:


Radio Focus International: 6284.7, 4/26, 0352+ One of the strongest signals you'll find from a Europirate in the Midatlantic states on 48 meters, but the thunderstorm noise is tremendous tonight. UK-accented DJ with a variety of pop and rock music, such as John Fogarty "Rock'n'Roll Girls," Foreigner "Cold as Ice." Clear IDs & announcing 6285 kHz. I was thinking that I had a QSL from Focus, but I guess I just heard the station last year. A lot of DXers in North America should be able to hear Focus tonight.

I think I'll try to dig another wheelbarrow load of dirt, but right now I have:

Island Radio: 6221, 4/26, 2355+ Really strong carrier with decent audio now. Light pop music, but nothing that I've been able to ID yet.  At 2359, I heard what sounded like an ID break, but I started getting some USB QRM on the frequency. Jari in Finland says this is Island Radio. Nice signal & I've never heard the station before.

Wow, can't believe how many stations have been coming in from around the world tonight. Nice conditions! Some great signals + some signals from Europe that are strong enough that my ears aren't ringing from trying to strain through the static!

Wolverine Radio: 6945U, 4/27, 0200-0219* Wonderful signal with crazy theme. Right now (0219) is the final SSTV image and it's not nearly as clear as the signal has been. After show, Dick Weed and a couple of other guys QSOing. One guy said that he used to pirate on 6200 kcs years ago from the south side of Chicago. These two guys are trying to encourage Dick to put on a show.

I came in from digging a garden out of a shale bed and checked the radio at about 2200 UTC and checked the European bands. I had just had really weak carriers. But when I came back a couple of hours later and I had a few nice signals.

Radio Star International (UK): 6219.3, 4/19, 0014+ Not bad, but I wasn't getting too many details through the speaker. I think I'll need to check this on headphones to hear what it sounds like. Radio Star International is fun station to tune in. I heard it a few years ago on Easter via a European web radio and this is one of the few stations that I've heard over the past decade or so that uses DJs in shifts. It was a really entertaining show. 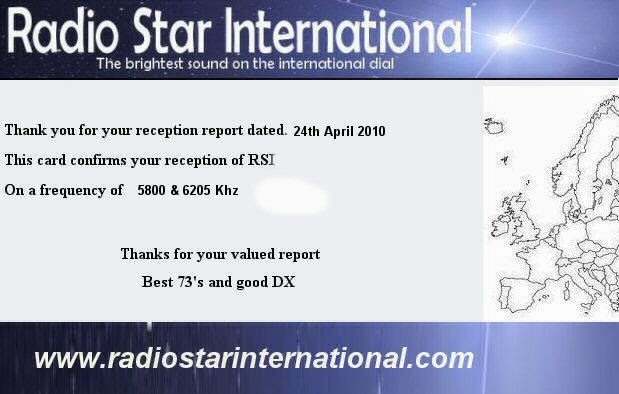 Radio Marabu (Germany): 6239, 4/19, 0116+ A really nice signal for a European pirate. An oldies show this time, with '60s music, although I didn't know any of the songs. I think this will be on for a number of hours, so I wonder if it'll fade back in overnight toward morning.