0-60 Degrees Radio from Europe was testing in the afternoon on 21750 kHz LSB & 15880 kHz LSB, but unfortunately I missed the first & couldn't hear a trace of the station on latter frequency.

The Crystal Ship: 6876, 3/29, *2312-0142* Tuned in to 4 min. of dead air with full quieting. On with Jefferson Airplane "Someone to Love" then "Age of Aquarius." TCS "Flower Power" show announced. "San Francisco," "Along Comes Mary." Sudden off near the end of "Hungry for a Good Thing." Fantastic signal during entire show.

Radio Free Mars: 6924.4, 3/30, 0126+ David Bowie "Major Tom" news clip about someone having trouble making bail, back to "Major Tom." Pretty good signal, but some fades and pescadore QRM. It's been a few years since I've heard RF Mars, so great to hear again!

Radio Caroline: 6290.52, 3/27, 1640+ SINPO: 35544. Lots of jingles, some classical and pop music. It sounds like it might be into news in German because male and female announcers are alternating talking. E-mail address announced a few times. BTW, this is a tribute station to Caroline. 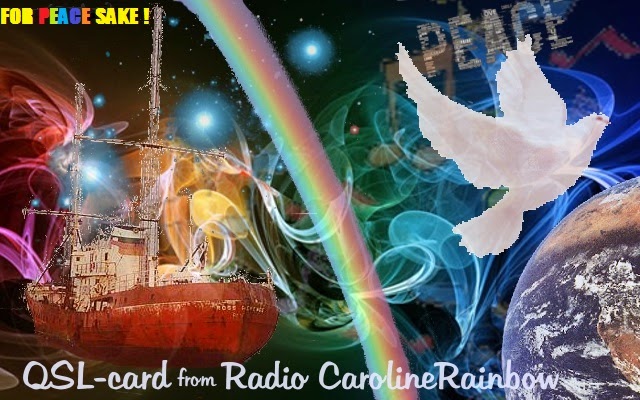 I received this eQSL because I wrote a note to the op, letting him know that I was listening in on the web receiver. He said the station was using 40 watts from the Czech Republic. I guess that was a decent catch from a receiver in Holland, at least at that power and signal level.
Posted by AY at 2:09 PM 1 comment:

The Crystal Ship: 6876, 3/27, 0049+ Great signal with a '60s rock theme show: Eric Burdon "Spill the Wine," Juliana Montana TCS ID & address, acapella song about seeing you again, Ramones "We Want the Airwaves": Audio out just at the beginning of the vocals, dead air with a grounding noise, etc. then "The Beat Goes On"
Posted by AY at 5:55 PM No comments:

I've been burning a lot of CDs for the latest Pirate Radio Annual and the burner creates a lot of RFI, so I might need to shut this operation down later on if a station that I don't log too often comes on. As a result, I might experience more March Madness tonight than pirate radio, but we'll see how it goes. This is what I have so far:

Funny; it seems like I missed nearly everything last night while eating supper (Pirate Clips Radio) or doing some things with the family (Renegade Radio). I did manage to hear Captain Morgan:

I was hoping for some Europeans testing to North America, esp. on high frequencies in the afternoons, but they must've all been tested out after the very successful weekend of such activities last week.

Old-Time Radio unid: 6770, 3/22, 2300+ Duffy's Tavern episode that I think is from May 25, 1949, with Archie writing an opera. Ed Wynn as guest star. Not sure if it's a generational thing or if it has something to do with my sense of humor, but I can't really tolerate Ed Wynn. This is the 1st time that I've heard a Duffy's Tavern episode on this station. Ads for Vitalis and Mum.


Just saw BJ Anya of NC State drop a left-handed hook shot to beat LSU in the final seconds in March Madness, but that's neither here nor there on a radio blog.

I saw on HF Underground that veteran DXer Myteaquinn just picked up his dream receiver from when he entered the hobby, a Japan Radio NRD-505. Congrats! This radio is from 1977, a bit before my time shortwave listening. I haven't seen many people even mention NRD-505s, let alone have I ever seen any in real life.

That started me thinking about the number of NRDs sold among the different models. So, here's my really unscientific method: Check completed auctions on eBay. Here are my totals:

I can understand someone selling their 25-, 30-, or 35-year-old receiver, but I'm surprised that so many people have offered their NRD-535s for sale. Such a great radio.

Getting back to the eBay totals, the NRD-505 has always seemed to me to be the uncommon radio of the lot. Considering that the original cost for this was around $2,000 back in the late '70s, I wouldn't be surprised if very few were sold in the U.S. I knew a few DXers who owned an NRD-515, so my perception was that they were at least a bit more common. The '525 and '535 were both really common. The totals from eBay reflect my perceptions, but I don't know if they reflect the ratios of the NRD models sold.

It's been a long time since I've posted Outbander SSTV images. For the uninitiated, these are images from unlicensed stations who transmit around 27600-27800 kHz. Although they have callsigns, these are based around some guidelines created by associations of outbanders. I've received tons of these images over the past few weeks, but I'm posting ones with different callsigns, just to give a sampling of what I've decoded here. 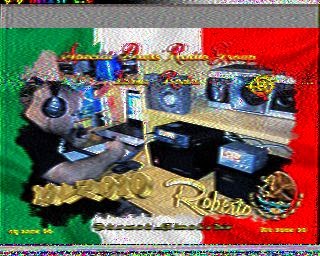 
Last night, I tuned into a station on 6924.4 kHz that had been airing some music earlier, but the songs were over and all that was on was dead carrier. I missed all of the music, but I did catch about 10 minutes of carrier. Nice signal, with a lot of quieting (not quite full) on the carrier.

But that's not all. I haven't seen anyone else mention it, but the Old-Time Radio unid on 6770 has been airing just dead air for the past few days. Maybe three days? Wonder if it'll switch to a different frequency soon or if the programming will return? It's been a pleasure to listen to and have around on the bands, so I keep trying to not take it for granted.

We had a foot of snow here yesterday at long last & it was -11 this morning. Maybe the modulation of these stations got frozen in the ionosphere and only the carriers made it to the radio.
Posted by AY at 7:32 AM No comments:

Yesterday, I drove for about five hours through freezing rain, from Philadelphia to home. You know that the conditions aren't too great when everyone's driving about 40-50 mph on the PA Turnpike near Philly.

The Winter SWL Fest is always invigorating to me. I always return home with fresh ideas (to me, at least) and an optimistic attitude about the future of pirate and/or shortwave radio. Just something about chatting with others with similar interests and different concepts really cracks the winter doldrums. At this point of my monologue, I always mention that hobbyists in other parts of the country should at least try having some small get-togethers, if not a full-out fest.

It was nice to see that attendance rose by about 19 people from last year. Not a bad turnout, considering that it isn't really advertised, we're a few years past the 25th anniversary of the Fest, and some high-level events (the Resurrect Dead movie premiere and Mark Fahey's North Korea presentation) are in the past.

Unfortunately, I was unable to leave for day 1 and I missed the events on Friday. A lot of great stuff was slated, such as George Zeller's pirate forum, atrainradio's talk on getting youth interested in shortwave radio, and David Goren's Shortwave Shindig. Some other talks were slated for Friday & Saturday that I wanted to see, but didn't quite as directly apply to pirate listening.

On Saturday, Mark Fahey returned with a lot of video and propaganda from around the world. As mentioned above, Mark has spoken at length at the SWL Fest and other locales about radio monitoring and the socio-political situation in North Korea. I find North Korea to be fascinating because it's the most repressive regime on earth and because its cult of personality of bizarre and downright insane. If you don't believe the latter part, try reading the DPRK constitution sometime.

In case you're wondering, not everyone in North Korea believes that they're living the dream. A number of North Koreans in exile are working to create a social revolution with episodes of Friends. The article, from Wired magazine, shows the lengths taken to bring even the most innocuous entertainment into North Korea, with the hope that some people will being to question their existence and the country's leadership.

I wonder, if South Korea had a thriving pirate radio scene, just how many of those broadcasts would be audible in the North. Likewise, how many North Koreans would begin to question the
authorities (and eventually defect) for a relatively minor level of shortwave pirate activity in the South?