I listened for Radio Ukraine International via WRMI, but this particular transmission is beamed to Central & South America. I thought I'd still be able to pick up some signal bouncing from somewhere. I did have a little bit rattle into the antenna, but all I had was carrier with a bit of unintelligible talk. It was a significant statement for WRMI to air RUI's programs for free and although I appreciate their efforts, it would be nice if a station would air their shows with a beam to North America.

I checked 4625 kHz to see if anyone was jamming UVB-76, the Russian military data station. UVB-76 is loud & clear at 1255 UTC, but nothing else is being heard on the frequency. I mentioned a few days ago here that someone is streaming UVB-76 on YouTube. What amazes me is that every time I check this feed, there seem to be about 50 to 80 people viewing it when it's just intermittent buzz.

As far as standard pirate radio goes, I did hear Outhouse Radio last night on 6925 kHz, Ion Radio on 6955 kHz with a fantastic signal. This morning, I had Radio Pushka on 6920 kHz with a signal very similar to that of WRMI this morning: decent carrier but just a bit of audio.

I hadn't heard Radio Europe in the past day or so and I didn't see any logs during that time. It's nice that I can report the station again because it means the operators are safe. I'm hearing it right now via a web receiver in Poland on 5835.2 kHz playing Roy Orbison "Pretty Woman." I think it's too early for the signal to be propagating too far to the West, but I could also hear it on the Twente receiver, as well as KIWI SDRs in Germany and Switzerland. 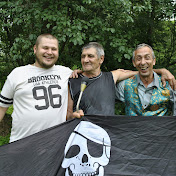 I haven't heard much activity via my own receiver lately. I listened to X-FM on Friday night, but mostly via a web receiver so that I could hear it in stereo. I was away for nearly all of yesterday. And, so far today, I heard a station on 6925 kHz USB around 1330 or so, but I was away from the radio again and need to check for an ID and more information.

Meanwhile, war continues to rage in Ukraine and I've been listening to the radio and checking for information about pirates and/or clandestine stations broadcasting from or to the region. I haven't heard Radio Europe or seen any logs from the station over the past day or so. Hope the operators are safe.

Radio Monique International: 6325 kHz, 1740-1810* Simon & Garfunkel "Hazy Shade of Winter," Talking Heads "Psycho Killer," "Eve of Destruction," Bob Marley "One Love." Excellent signal. Talk about the war in Ukraine and how everyone needs to protest against Russia because it could mean the safety of the world. At end of show, told Russian soldiers in Belarus to turn around and not participate. Calling Putin "a crazy madman"

UVB-76: 4625 kHz, 1730+ The Russian military station is going strong, but I didn't see any jamming, waterfall images, or broadcasts of the Ukrainian national anthem

A station on 4625 kHz is jamming UVB-76 with what currently sounds like Eastern European disco. The jammer is very strong at the University of Twente site

Saw this morning that Russian forces are closing in on Kiev. Former Ukrainian president Petro Poroshenko was on the street armed with an AK-47. He and his civil defense group are preparing to fight the invading army. Really surreal.

I heard back from ULX2. Last night, he said "Thank you for your support! I'm OK at the moment, but situation is quite anxious in Kyiv: distant explosions were heard now and then. It is due to missile attacks on our military airfields." He has been much more active on his blog than I've been on mine, with updates as recently as three days ago. You can check out his Ukrainian DX Blog here.

At least one Ukrainian shortwave pirate was on the air yesterday. Radio Europe was reported from 1630-2036 UTC on 5835.2 kHz by Ray Lalleu in western France. Ray heard Ukrainian punk and rap, with some talking mentioning Ukraine. If its signal can be heard in France, Radio Europe should be audible across nearly all of Europe if it is able to continue broadcasting. I don't have recent audio of it, but here's a clip from August 2018. It was reported in the video as a Russian station, but it was later determined to be Ukrainian. Here's a video of the transmitter in operation.

This morning, Radio Mir, a Pirates for Peace station, was running an audio loop with a message in Russian, calling Putin a dictator (comparing him to Hitler) and the song "Russians." This ran from 1040 to 1306 UTC on 6295 kHz. It was reported by about a half-dozen listeners on HFU, including Kostiantyn Pravotorov, also a Ukrainian DXer. It was heard on SDRs from Ireland to Germany, but not in Eastern Europe.

And I can't forget the station that was playing music and sending waterfall messages and images over the Russian military station UVB-76 on 4625 kHz in January. Here's a YouTube video and another. The SWL Channel has a live stream of UVB-76 running on YouTube. It's not too exciting, but more than 70 people were on while I was checking it out. I guess the news of the day has people focused on stations like these because I can't imagine people just sitting around listening to it otherwise.

Radio Europe (presumed, based on frequency): 5835.2, approx. 1715-1830 UTC VG signal with pop songs from the 1960s that you could hear on American radio, such as Archies "Sugar Sugar," Dixie Cups "Chapel of Love," Chris Montez "Let's Dance." Then went into some live songs by Hendrix.

I woke up this morning to the news of the Russian invasion of the Ukraine, with attacks on at least 16 locations across the country.

I've tried to stick primarily to radio news on this blog, but I'm not posting right now with news of pirates or clandestines broadcasting from the region.

I don't think that many of us have connections to Eastern Europe, but many have had personal interactions with our friend Alex, ULX2, in Kiev. For at least a decade, he's been listening to and reporting North American pirates, most notably Wolverine Radio.

Prayers for Alex, the Ukraine, and the greater situation. 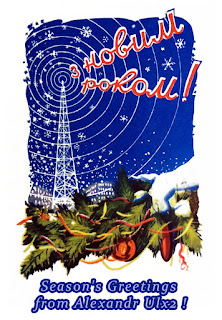 This will probably be too late for anyone to tune in, but Cupid Radio from Holland is coming in with a good signal right now on 15075 kHz. No time to write more!

I've posted on message-in-a-bottle stories and other somewhat similar situations here before. I (and presumably a few other pirate radio listeners) have a fascination with the mysterious and seemingly untrackable. I mean, in a world where China is developing AI-based software to track and imprison people based on the appearance of their faces and even determine what emotions those people are feeling, I think it's encouraging that a 580'-long 26,500-ton ship can go unreported for the past 13 years.

It would have been something if someone had installed a shortwave transmitter on the ship with a power source and a high-capacity MP3 player full of programming. Or maybe the Old-Time Radio Unidentified station was actually a ghost ship floating around in one of the Great Lakes for all of its time on the air? 😀

Here's the link for the recently spotted ghost ship that, to the best of my knowledge, does not contain a pirate transmitter: