Great stuff while I was out yesterday afternoon & night! In addition to what I reported last night, also UKDXER commented on the last post that he had a tentative log of Channel Z on 6300 and he heard Wolverine Radio with a signal so strong that people in Europe thought it was via European relay! BTW, UKDXER's blog is a fantastic source of Europirate info. Also, I received an e-mail from Ray in Europe, who sent the following unid loggings:

Can anyone help him with these? As an aside, I also heard the carrier on 6930 kHz. I wondered at the time if this was Radio Pirana International . . . and I still do. Guess an e-mail is in order. . . .

I haven't seen any reports of North American pirates being heard around 0600-0800 UTC last night (or European stations being reported over here in that time frame). Wonder if people are sleeping in and will report it later?

LFR is reporting Baltic Sea Radio on 15085 kHz at 1220 UTC with a strong signal in the UK. I've been sitting on the frequency, hoping that something will come through, but I have a feeling that the only thing I'm going to get is the knowledge that I need a better antenna for 19 meters! Regardless, BSR is obviously making a long-distance test and I hope the station is getting out well (even if I can't hear it).

I had to be away today from about 1700 to 0400 UTC (!), so I missed an awful lot of activity. Worse yet, I stopped at three different places that were supposed to have open wi-fi so that I could at least update the blog with things that others were hearing, but none of the wi-fis were working. Also, I took along my Degen 1103, but I only heard one station . . . and barely. Here's my logging:

How's that for a logging? If the Wolverine Radio is too weak for me, then maybe it's time for a more sensitive receiver! It really makes me wonder if something is seriously wrong with the sensitivity. Anyway, Wolverine was reported in England and on the continent. Channel Z was also testing on 6300 kHz around the same time. Wonder if anyone in Europe heard it because it looks like it should have made the trip. 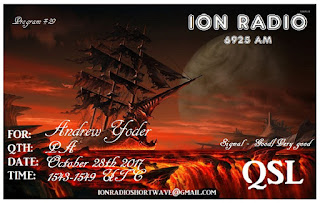 Dr. Detroit: 6955, 11/3, 2143+ pop music--I think mostly from the '80s. Dr. Detroit said the show was being broadcast via Radio Illuminati. Boston "Rock'n'Roll Band" Excellent signal. This is also being reported with a good signal in England! BTW, Dr. Detroit is a mostly forgotten movie. Here's the trailer.

Clever Name Radio: 6945U, 11/3, 2215+ Very strong here & I can hear it on the Twente web receiver in Holland! Female computer voice IDs. Early Pink Floyd & Offspring songs. Computer voice with shoutouts to the PEI DXpedition & to Krissy in the UK, who e-mailed

unid: 6930, 11/3, 2301+ Weak carrier, about the same strength as Enterprise on 6940. Not sure if it's a pirate or what part of the world it's from. Signal strength & frequency makes me think of Radio Pirana International, but I don't have any indication that it's on tonight

Europe
Radio Enterprise (tent.): 6940, 11/3, 2254+ Decent carrier right now, but it doesn't really sound like it's strong enough to have any audio (and it doesn't), at least not yet. It's been heard In Europe for at least an hour

Radio Abu Dhabi: 6285, 11/4, 0057+ Sounds like some clips of different older countryish songs. Occasional talk by DJ with a deep, rough voice. ABBA "Dancing Queen." Lot of static or this would be pretty good. Still, it should be audible for a number of people in the East. I think I just heard Johnny Tobacco say "Thanks for listening" Seems to be losing signal strength & audio. <moments later> signal comes right back up & sounds pretty good again
Posted by AY at 3:00 PM No comments:

Propagation maps are looking bleak between Europe and North America. That said, actual results have been good between about 2200 and 0300+ (I'm not sure about the end time because I haven't seen loggings past this time).

I used the VOA propagation models at http://www.voacap.com/. The images depicted here all come from that site. Feel free to go to the site and check propagation for your region. For transmission power and mode, I used 100 watts of SSB because that seems like a pretty standard baseline for North American pirates & for at least some of the European pirates who might want to be testing specifically to reach across continents.

As you can see, a station with these specs should do very well into the deep South, Spain, western North America, all of Canada, and (whether or not anyone is listening) Greenland, the Caribbean, Mexico and Central America, and northern South America.

Fairly similar, but a bigger 1st skip hole and a great shot at South Africa and maybe a weak signal into Japan, South Korean, etc. Of course, there's also a nice zone for Angola, Namibia, and the Sahara, but I've never seen any reports from those areas.

Now, I'll switch over to Europe. I picked Netherlands because it's the hotbed of activity in Europe. Here's 100 watts SSB into an antenna about 30 feet high at 0000 UTC:

I'm really encouraged by this because we've been hearing some stations from Europe the past week and although I'm sure that some of the variables are different (power, antenna height, mode, and location), overall this picture is bleak and it doesn't look like much anything would be audible in the U.S. or most of Canada. The fact that a few stations have been heard this week with better than average signals makes me think that actual propagation this weekend should be a bit better than what's shown here.

Now, to see what happens when the frequency drops. Here are the same variables but on 5.3 MHz (think just below 49 meters):

The signal is surprisingly good, but we haven't heard any pirates using 57XX kHz or so lately, so we really don't have any real results to compare it to. Still, it looks like a Dutch station operating on these lower frequencies has the chance to have a great signal in all of Europe, parts of Asia, and still have a chance to be heard in northeastern North America. Something to keep an eye on.

Not so great results for the Northeast, but as you can see, this looks great for anyone in the western half of North America who doesn't typically expect to log Europirates! Also, this looks good for DXers in Australia and New Zealand.

Even though propagation looks challenging, it appears that propagation will allow plenty of opportunities to hear stations in different parts of the world.

. . . and runs through Sunday. Propagation has been good on 48 and 43 meters, as evidenced by last night's reception of Clever Name Radio across much of Europe. I'll try to be back later on today with some propagation forecast maps, etc. If I receive any schedules in the mean time, I'll post those, too.
Posted by AY at 4:27 AM No comments: 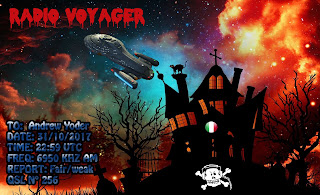