After spending too long creating and placing running heads, creating the cover, and debugging files over the past two or three weeks, the 2017-2018 Pirate Radio Annual is done and at the printer, as of this afternoon! This edition is 308 pages and will contain an audio CD-R (playable on standard CD players) containing clips from 86 different pirate stations from around the world, nearly all from 2016 and 2017. This edition contains 181 illustrations and entries for approximately 307 stations reported in North America in 2016 and 2017 (280 North American shortwave stations and 27 from Europe and South America). 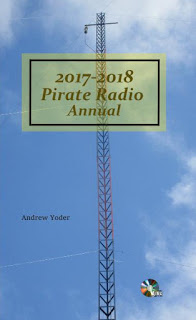 Now I have my fingers crossed that the files will be OK and the printer won't have any problems.