I've been out and away from the radio for quite a while, but I'm at the Winter SWL Fest and am sitting in the audience of the Shortwave Shindig (being broadcast live via WRMI on 6855 and 9395 kHz), hosted by David Goren. With the lights dimmed, it has a sort of low-key variety show feeling. I don't think that there are many experiences quite like this anywhere in the world.

I've spent a number of days over the past few years listening to vintage radio programs on the old-time radio unidentified station. Some of these broadcasts were variety shows, such as Jack Benny, Red Skelton, etc. I'm sure that it doesn't quite have the majestic vibe of attending the original variety shows of the '40s and '50s, but I still imagine that the feeling of being here is the closest I'll get to experiencing those shows of yesteryear.

There's always a lot of interesting information here. Tomorrow should be a fascinating forum with Chris Ise and Andy Walker, who will talking about Offshore '98, Radio San Marino, and Mystery Radio. Right now, broadcast anthropologist Mark Fahey is giving a teaser for his forum tomorrow regarding radio archiving.

I'll be writing more about it soon, but the next Global HF weekend is March 30-April 2, 2017. I've already heard from some hobbyists who are interested in participating, so I'm looking forward to activities over the weekend.

On an entirely different note, I was trolling around through some little antique shops and found a cathedral radio made by Burley. I'd never heard of Burley and I found almost nothing anywhere on the Internet about the company or the radios. Someone refinished the cabinet, maybe in the '80s?, and there was no tube lineup/model number label glued inside the case. But it does have a decal on the chassis with patent numbers. And in small print is "Mfd by U.A.C.C." I found that this means "United Air Cleaner Company" and UACC made the Sentinel radios. I guess that Burley was probably some brand made for a little department store or hardware store, but I have no idea who . . . and this case doesn't match up with any other radio that I've found online. At some point, I'll probably write more about this radio. But for now, here are a couple of photos: 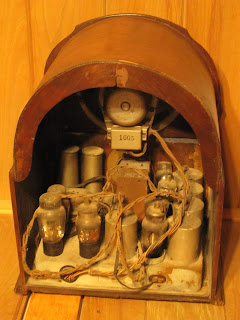 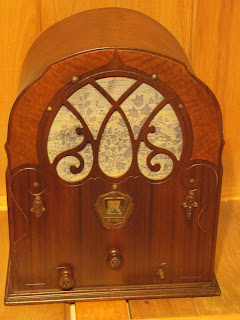