I've been listening to Bluebird Radio from Netherlands on 1629 kHz via the Twente web receiver this afternoon. I've also been listening to another Dutch pirate on 1618 kHz. The programming is what I'd expect: mostly polkas and schlager tunes and some shoutouts.

About 25 years ago, I heard the pirate Farmers from Holland a few times on shortwave. If I remember correctly, I sent the station a reception report and a cassette recording, but I never received a response. Ah well, that said, the response from my reception reports to Dutch pirates has been far better than that from licensed stations in Peru and Bolivia.

Farmers from Holland had a fun QSL and it would have been nice to have received one, if for no other reason than that I could have used my own QSL to illustrate this blog entry, rather than search around on the Internet to find this image: 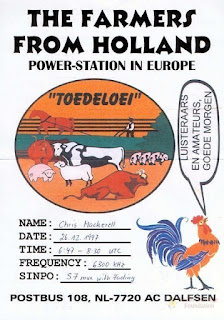 I'd read before that most of the Dutch medium-wave pirates are from the rural northeast, toward Germany. If the pirate operators from this region aren't farmers, they must know some. Wonder how many Dutch farmers listen to their friends playing polkas above the MW band while out in the fields?
Lately, I've seen some news reports about Dutch farmers protesting climate restrictions that they say will put as many as 30% of farmers in the country out of business. Some of the news bits that I saw were tractor parades on Dutch highways (reminiscent of the Canadian truckers in the spring), dumping milk, burning hay bales, etc. I believe I read that The Netherlands is the #2 exporter of agricultural products behind the US, so this is potentially a big deal.
I assume it's a polarizing topic in Europe as it is in North America. Here, most corporate media has ignored the Dutch protests, but the independent and right-leaning media has covered them somewhat regularly.
This blog post is to provide some background and to ask one question: Has anyone heard any Dutch pirates with programming that in any way is connected to these protests--even if it's just playing some requests for farmers? I haven't, but I haven't listened as closely as many people do . . . and I also don't understand Dutch!