I stopped at the mailbox today and found a packet with a thick, cardboard pennant from WMMR, Mysterious Mystic Radio.

I enjoy pirate radio listening, period. Stations don't need to verify reports with eQSLs or ever respond to me to make me happy. A couple of good examples of this are the Voice of Communism and Radio 6X. The Voice of Communism was one of my memorable listening experiences. Still, to this day, one of the best and best-produced parodies that I'd ever heard. Radio 6X was a fun rockabilly station that would pop up on frequencies off the beaten path about 6-8 years ago. They reminded me of what a late-night rock'n'roll station from 1962 would sound like.

Neither station QSLed, but I really enjoyed their time spent on the air.

That said, I do collect QSLs and I enjoy looking through QSL albums (both mine and those that other people have). I also have a binder full of pennants, most received from licensed shortwave broadcasters. I spent so much time listening to and QSLing pirates that I missed out on a lot of the great pennants that were offered back in the '80s and, to a lesser extent, in the '90s. Instead, I mostly have pennants from the large, national outlets (Radio Canada, Deutsche Welle, Radio Peking, etc.), a few from the latter days of the Latin American QSLing days (Radio Santa Cruz, TGNA, etc.), a few pirate pennants (WSKY, KNBS, etc.), and a pile of paperboard pennants from the Winter SWL Festival.

So, I think it's awesome to pull open an envelope in the waning days of 2013 and find a two-sided pennant from a shortwave pirate. The station op said "the 'pennant' is sorta like the ones that the REAL shortwave broadcasters used to send listeners, except of course that theirs were well-made and professional looking, and mine looks like 'a blind four year old made it at nursery school.'"

In an era when the major shortwave stations don't find me or the rest of their shortwave audience worth broadcasting to, I find a handmade pennant from a station that plays music from Edison cylinders and 78s to be refreshing. 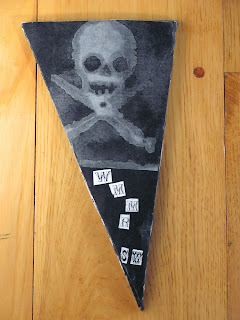 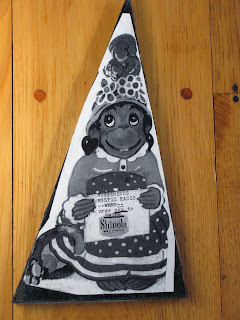