The Success and Failure of War of the Worlds

Today is officially Halloween (both locally and in UTC). After reading the Slate article on the myth of the War of the Worlds broadcast, I thought that I'd write more about it and some of my impressions. However, SWLing.com has an excellent feature on the 75th anniversary of Orson Welles' grand entrance into mainstream fame and the American media textbooks.

As mentioned in this article, Welles' War of the Worlds broadcast has gone down as one of the greatest media hoaxes ever, fooling the simple townsfolk of New Jersey into pulling out their torches and pitchforks to confront these potential destroyers of the American way. This event has been rehashed countless times, often with a nostalgic but superior air: "Oh, those kind, innocent people. They were good to each other back in those days. We might have lost our innocence but we are oh so media savvy now that we would never fall for anything of this nature." 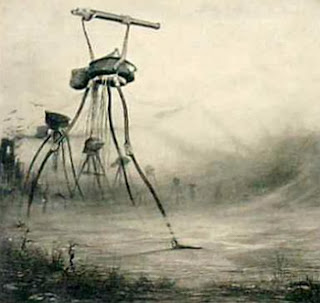 But as the Slate article maintains, the people of 1938 didn't fall for this hoax, either. I have looked for information in the past on the War of the Worlds broadcast for a potential article, but it always results in dead ends. The problem isn't the number of published articles, it's the type of article. The main Associated Press article was published throughout the country the day after the broadcast. A few days later, you can find biographical articles about Orson Welles and those on a public outcry to the FCC and the resulting investigation.

What I haven't found are local articles about how the local townspeople massed at the National Guard building and divided up arms among the civilian defense patrol or that a few people tried to rob the local gun store or that even poor widow Harriet Schlogman had a heart attack and died while listening to the broadcast. Nothing. Perhaps those articles are out there and if so, I'd love to find them. But I don't think they exist and that's why I don't need much convincing to believe the authors of the Slate article.

As for the public outcry, well, it had been front-page news for a few days. It was spectacular reading and people back then did write letters. I don't have specific examples on hand, but popular radio personalities received literally multiple postal bags of mail. It's not out of the question that people would write letters expressing their outrage to the FCC after the had been reading that mayhem had been occurring around the country...not in their town, of course, but most everywhere else far away.

The War of the Worlds broadcast was a touchstone event in U.S. media history and in worldwide media history. It's one of those events that serves as a model for awareness. As was written by Thomas on the SWLing Post:

Prior to the dense radio propaganda surrounding World War II, The War of the Worlds undoubtedly made radio listeners, from that point forward, seriously question what they were hearing over the air. It forced them to listen with a skeptical ear, to realize that no matter how “real” a report might sound, not to assume its authenticity just because it was broadcast on the radio––or, for that matter, printed on the page of a newspaper. This was to become an invaluable tool in the coming days of American involvement in the war, especially for GIs desperate for news from the home front while propaganda seized the media.  Whether during Welles’ thrilling production or in the news frenzy that followed,  radio’s power had been publicly highlighted, and that power was sure to have an enormous impact on the coming world war.


But this knowledge was not spread everywhere. Ironically, the Orson Welles' broadcast of the War of the Worlds was known for causing chaos and striking fear into the hearts of multitudes. We now have reason to believe that this wasn't the case...and that the few people who tuned checked out a radio play and nothing more.

However, more than a decade later, on February 13, 1949, the residents of Quito, Ecuador, knew nothing of H. G. Wells or Orson Welles. It also raises some doubts as to whether the staff of Radio Quito understood the power of the radio medium. During one of the station's musical programs, an announcer broke in with an "urgent piece of news."

Then followed bulletins of the enemy approaching the city in the shape of a cloud, slaying residents and wiping out towns, Actors impersonating a government minister and the mayor begged the populace to be calm and for the men to fight.

The newspaper article does not mention any radio station disclaimers that this was just a radio play. This is a problem.

At the climax of the show, hysterical crowds poured into the streets. But the staff personnel discovered that they had set off a frenzy and decided to allay the fears of their listeners by announcing that it was just a fictional story, told in fun.

The fun-loving people responded by attacking and burning the building of the newspaper El Comercio, which housed the radio station. According to the report, only the front of the three-story building was left standing. Evidently, the crowd might have been controlled sooner, but the many of the on-duty police officers had been sent to quell the alien invasion in the countryside. In the end, 15 people were killed and at least 15 others were reported to have been injured. The riot was finally ended by army troops, which used tanks and tear gas to disperse the mob. 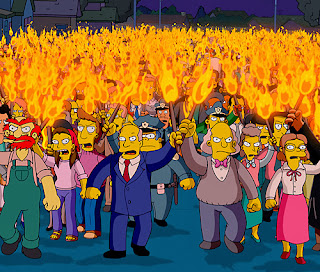 And this is the story of the successful (or wildly unsuccessful, depending on your perspective) War of the Worlds hoax.

Note: I assume that this is the same Radio Quito that has been on 4920 kHz (approximately) for decades. Newspapers very rarely cite the specific names of foreign radio stations and I was surprised to see it called out by name here.

I used the AP article from 2/14/49 for reference. I saw another site list the mortality rate at 6, but this article contained far less information.
Posted by AY at 7:14 AM