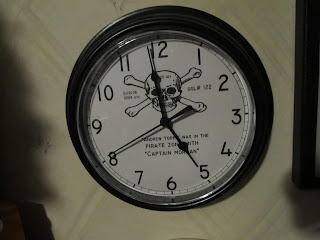 As promised, here's my Captain Morgan clock, QSL #122, from 2008. I don't know how many of these have been sent out, but the generosity of many pirate ops is really something.

I think I heard Crystal Radio a couple of times on Sunday on 6950.5 kHz. I made recordings, but both times, the signal was too weak to pull any details. The past couple of days, I've missed their relays of Samurai Radio on the same frequency. I think these Samurai Radio shows were from around 1983 or '84 because the station operator was announcing the old Battle Creek, Michigan, maildrop.

Another station that I've wanted to log is Radio Corsair, the medium wave pirate on 1710 kHz. It was on last night and I forgot to check the car radio. Tonight I did listen, but only had WQFG689 with a "technical difficulties" loop announcement. Every time this happens, I think they should just bring in the WHOT guys to broadcast via their transmitter.

Because this post is called "Auds'n'Ends," I need some audio, so here's Kilokat7's recording of Radio Corsair from about two weeks ago. It's really rough, but the signal starts getting a bit better around the 8-minute mark
Posted by AY at 8:31 PM