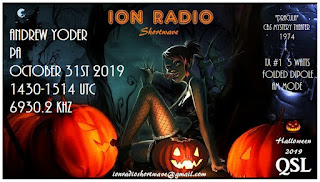 Good stuff, not sure how propagation will hold up, but right now it's great, with Ion Radio only broadcasting with 5 watts and being heard here with excellent signals!

Ion Radio: 6930.2, 1430-1515* Caught the end of "Monster Mash," then some spooky-sounding talk and CW. Ads for Diet 7-Up & Shop Rite. Count Dracula story that sounds like it's from the '50s--aah, it's one of those CBS old-time-style radio shows from the early '70s. Into long segment of Watergate news. Then investigation into dairy monopoly. Phonetic IDs. This has probably been the best signal I've had from Ion

I missed Yeah Man Radio while I was writing about my 1st Halloween pirate listening experience. Oooops, I know, I should have been near a radio.

Ion Radio: 6870, 2004+ Wow, and I thought Ion sounded good last time! Solid, peaking up around S9+5. Wonder if this is still only 5 watts? Acover of Chipmunks "Witch Doctor" & into song "Trick or Treat." Talking Heads "Psycho Killer" Phonetic IDs, computer-voiced woman with e-mail address and said it's the Halloween 2019 show

6950, 2030 Noted in passing. I think this is Radio Enterprise from Italy. I guess I need to record this with the R8 & dig up something else to record 6954U with <Later> Maybe not. I'm getting too much splatter from 6954 to try for this station right now; the sync lock seems to be just locking in on the splatter

Argyle Radio: 6954U, 2032 S9+20 signal with a country song. Seems to occasionally cut out. SSTV images, song "I Live for the Night," Beatles "Lucy in the Sky with Diamonds" Rough-voiced announcer on with IDs, accidentally started SSTV image while talking "Your special Halloween show from Argyle Radio"

Radio Illuminati: 5150, 2140+ Just tuned in during a song. Signal sounds good. I have it recording in the radio room & will try to listen in the basement while painting the walls. So far, it's working. A bit of painting done & I'm setting up a receiver & speakers to listen to everything better. Announcement from the Azimuth Coordinator thanking everyone for tuning in. I think he said that both Redhat & Senile Jones are taking part in the show . . . and maybe someone else? "Werewolves of London" Specials "Ghost Town" "Monster Mash" etc. Sounds great through the amp & speakers . . . I should've gone down earlier to listen!

Radio Free Whatever: 4185U, 2230+ Best sig I've had from RFW in at least a year! DW choking on salad, clarifying that he's not a commie (despite the CCCP flag avatar), shoutouts to HFU folks. I'm ready to go back down to the bunker to keep painting & listening to the audio on the big speakers

Wolverine Radio: 6960U, 0030+ Weak signal with a variety of music (blues song right now). Can't hear it on the basement setup, so I've dropped the paint roller & am listening a bit upstairs now. At least a number of people have been tuning in these shows!

Unid: 6955U, 0100+ Weak in a lot of t-storm noise, but it sounds like a MARS or military op calling someone on the frequency in a monotone. I don't recall military using this frequency. I'm recording it, just in case it's a pirate, but I thought it might be worth mentioning

X-FM: 4185, 0007+ Decent carrier, but a lot of noise. Light pop music. Had to walk the dog a couple of times, but I gave up on listening to the radio & I've been listening to the show on an SDR in Utah. Pretty good, but even noisy there. Right now (0306), Redhat's running through all of the listeners on HFU & apparently he's about ready to sign off. Too bad because I still have about a half can of paint to use up in the basement before I go to bed.