YHWH: 21450U, 3/29, 1913-1921* Religious station here on the edge of the ham band getting hammered by QRM. When other stations are off the air, it's 100% copyable. Trying to hear enough of the programming to get a read on the op's theology. Op only says "Yahweh" not "God." Going through the 10 Commandments, one by one, with commentary in between. "Thanks for choosing this radio station, YHWH." Into weird synthesizer music. "Thanks for tuning in to radio station YHWH. Until next time, I love you. Radio station YHWH now signing off." If the operator's out there, Please QSL...also I have a recording.

Ran some errands, continued digging out a flower bed, and checked the computer YHWH is back:

YHWY: 21450U, 3/29, 2016+ Tuned back in to hear the weird synthesizer song. Sig about as good as last time, but most ARO QRM on the frequency. OK, the op does say "Yahweh God." I tuned into the broadcast earlier than last time, but absolutely hammered by QRM. I think he said this show was "Break the Evil Spell of Satan." I think he just said "...the homosexual Catholic Church." He said something like "Christendom has exhibited nothing but bloodshed throughout its history." Now talking about how the 5-pointed star on the US flag is satanic. Hmm...I'd like to hear more of this to be able to put these comments in context with the rest of the programming. It would definitely benefit YHWY to move up a few kHz and get out of the ham band...and I'm sure the hams would appreciate it, too. An exasperated ham just repeated "Frequencia en uso" a few times. From what I can tell, the programming seems to have settled into more traditional Christianity. Wow, I've just had about a minute without any QRM!

Planted some trees and now back to check the radio. I have strong carriers on 6921.7 and 6930 kHz. Not sure who they are. Checked HFU & found a Europirate:

The noise disappeared and according to HFU logs, 6930 is Premier Radio from Ireland. Also, I'm hearing what, according to the op in Iann's Chat is Radio Flying Dutchman on 6255 kHz. Pretty good carrier, but barely any audio here. I had some audio on 6324.3 & I think it was Radio Dinosaur from Europe. Lots of noise on the band, though.

Wolverine Radio: 6950U, 3/30/14, 0114+ Starting with old swing songs. I don't have the titles for what I've heard, but every song has mentioned "tonight," so I think that's the theme of tonight's show. Excellent signal & audio 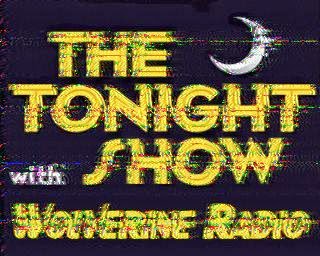