Wow, there was a ton of activity over the weekend. Maybe it was a warm-up for Christmas Eve & the weekend . . . or maybe this was it for a lot of stations. I guess we'll see. Unfortunately, I was away or at a Christmas party or baking stuff most of the weekend. So, I only caught a fraction of the broadcasts, but at least I did get the chance to hear a few stations.

Pirate Radio Boston: 6925.7, 12/19, 1408-1443 Good signal for the PRB annual Christmas show. Songs "No Place Like Home for the Holidays," Chuck Berry "Run, Run Rudolph," "Frosty the Snowman," "Have a Holly Jolly Christmas," "Deck the Halls," "Santa Claus Is Comin' to Town," Guest IDs by PJ Sparx of WREC & Dick Weed of Radio Free Whatever. Charlie Loudenboomer said they have a special QSL for this broadcast.

Partial India Radio: 6925.7, 12/19, 1443-1508+ Interval signal, into the General Underseas Service of Partial India Radio, tribute to Jay Smilkstein "Jay certainly gave a lot to the hobby . . . and we'd like to give him some attention here" gmail address for reports with phonetics. "Tears of a Clown" Long "homegrown" I Love Lucy skit including canned laughter with a trip to the Smilkstein hotel, including Uncle Schleckstein.

Amphetamine Radio: 6925U, 12/19, 1538-1613* Excellent signal with music by Neil Young, The Adverts "Gary Gilmour's Eyes," Ultravox "Sat'day Night in the City of the Dead," X "Adult Books," Siouxsie & the Banshees "Hong Kong Gardens," The Clash "Know Your Rights" IDs in CW, SSTV images (see below). I'm not sure if the music is being played through the mic, but you can hear whenever the op picks up the mic for the IDs. Live time check at end, then US National Anthem & off. 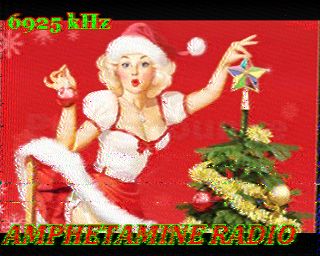 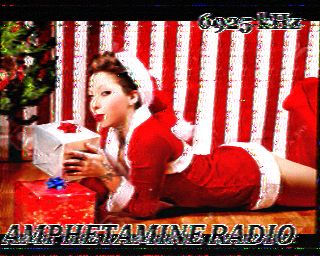 Pirate Radio Boston: 6873, 12/19, 2213- Repeat of the Christmas show. VG signal strength, but hammered by QRM from the ice cream maker AND dishwasher.


Girl Scout Radio: 6910, 12/19, 2300-2334* Fair/good with some bad local noise at times. Some songs that sound more indicative of "bad Girl Scouts" (like what you might expect from women who dress up as Girl Scouts for Halloween parties): Heart "Barracuda," Blondie "Call Me," Warrant "Cherry Pie" & a few hip-hop songs. Male & female computer-voiced IDs

Liquid Radio: 6925.1, 12/20, 0045- Fairly good signal at times with a variety of techno. Bad QRM at times from OTH radar & from the pescadors. Between the two + fade outs, there might have been some IDs, but I didn't hear them. ID from HF Underground