Test: Radio GSV from Scotland said the station will be testing to North America on 6965 kHz with music and IDs at 0330 UTC tonight. The station tested with Morse code a day or so ago, but it wasn't really heard, so we'll see how if the propagation improves.

L0de Radio: 6930U, 7/26, ca.0400 Fair signal, but not quite strong enough to sit back and understand everything. All telephone callins. I hit record so that I could go back & hear the show on headphones.

stuck in the office for part of today, so I was listening to Dutch MW pirates via the University of Twente web receiver:

Unid: 1636.5, 7/26, 2040+ This one was almost entirely schlager, but I did hear a couple of songs in English. I think this is the station that played ABBA "Knowing Me, Knowing You," but I'm typing this from memory. This station even played a yodeling song! Another extremely strong signal, but I didn't hear any talk or IDs.

Loggings from PA, USA:
Tip & Elvis Radio Show: 6220, 7/26, 2315 The Dutch theme of the day continues with this one. Thunderstorm crashes are making this difficult, but the signal is good for this time of day. I'm hoping to find my headphone adapter so that I can dig out some details from the noise.

Radio Free Whatever: 6925U, 7/27, 0212+ Very strong, but really "watery" sounding signal--kinda like low-bit-rate streaming audio. Canned station ID, then long pause and Dick Weed & Stephen mentioning that maybe that hard drive failed. But more music from a new drive. Talk about wearing lavendar-scented Hefty garbage bags as ponchos to sleep in, or just for comfort. It's been a month or maybe a couple months since I've heard RFW.

And here's the SSTV image from the end of the show: 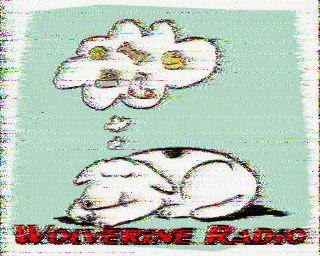 After Wolverine signed off, another station was on 6940 kHz USB with music and an SSTV image: 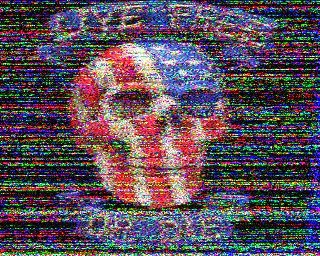 Unid: 6960L, 2/27, 0419+ Decent signal here in heavy static crashes with bits of different music genres, announcements, etc. On & off the air a lot. A couple different announcements in Spanish. Thanks to Skipmuck for the tip on this one. Until I hear more that shows otherwise, I'm thinking pescadore broadcast