11/18/13
I really like junk and history. Maybe one reason why I like junk so much is because it's stuff with a past. Then if it's combined with something that I'm really interested in, like radio, well, I'm hooked. Most DXers that I know aren't really interested in old electronics, so this segment and the other radio restorations might not interest most of the people who check out this blog, but maybe some who are into old radio will find these entries while searching on Google.

Disclaimer: I'm just a radio listener who reads a lot and is probably a little too unafraid of jumping into projects. I learn by making mistakes...and considering how many mistakes I've made over the years, I should probably know a lot more than I do. So, I encourage anyone who reads these restoration entries to check out similar articles from other people and take the good while leaving the bad!

That said, I bought a radio that is just way too much work. I'm hoping for the end result to be a somewhat-flawed, but overall nice-looking radio that works. Is that setting the mark too low? Maybe not, considering where I am with my Emerson tombstone or my Philco 39 (which I'll probably feature on here some other day).

I bought this Goldentone cathedral on eBay. A lot of radio guys complain about eBay, but I think it's mostly great. No one's forcing me to buy anything and it gives me a chance to see a lot of radios quickly that I wouldn't otherwise. One of the complaints is that everyone sells junk there (e.g., all of the people who say "Works--light turns on." Sorry but that fits the definition of a working lamp, not a working radio).

This Goldentone cathedral is definitely junk, but I love the very cathedral-looking front panel and it was close enough that I could get the radio without paying shipping. Also, the seller showed lots of photos, so I knew what I was getting into.

So, here are the photos: 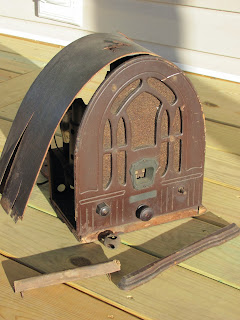 This radio looks like it's been sitting in a damp or wet basement for years. The veneer sides are toast & peeling badly, plus they've rotted at the bottom edge. The trim has popped and the nails are rusty. In front is a black walnut shell that was inside the radio--it was eaten by either squirrels, mice, or rats. Not a good sign. 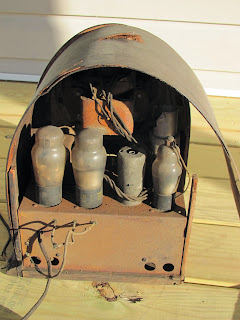 Here's the back side. The rear case supports are gone and the chassis is really rusty. The positives are that the tubes are here and the speaker cone seems to be intact.

One problem with this radio is that I don't even know anything about the manufacturer. I've found very little on the Internet about it and I haven't found this particular radio. I sure hope that the capacitors are marked well, and with designations that I can figure out!

11/19/13
The cabinet on this radio is so fragile that I'm afraid that I'll break everything apart when I pull out the chassis, so I'm trying to repair it structurally beforehand. My first goal is to reattach the side to the bottom edge. But before I do that, I need to glue the two plys of veneer and a cheap underlayment wood (maybe basswood?) back together and then fix the rotted-away edge. 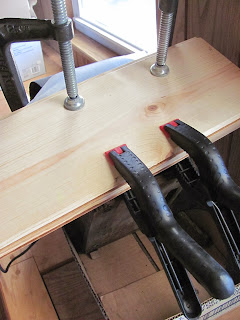 I wiped a lot of glue between the two plys and squeezed them flat between two boards with 4 clamps. I also used waxed paper to keep the boards from being glued to the plys. Last night, I pulled off the clamps and the plys pressed together better than I'd expected. 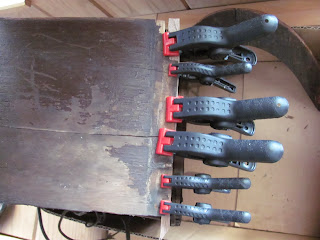 Today, I cut a piece of black walnut veneer to glue in where the underply had broken out. The frayed veneer edges require lots of clamps.

11/20/13
Last night, I cut small pieces of veneer to fit into the frayed edge, glued them in place, and filled the edges and the large crack with wood filler. The piece of trim that goes on this side was mashed in on the end (almost as if someone had dropped the radio so that it landed on its front left corner...hmmm...). I mashed it back a bit with a hammer and started filling it in with wood filler.

Today, I started sanding the trim piece and I sanded the extra wood filler off of the side of the cabinet. I tried to pound the nails back out of the trim, but they had taken on so much water for so long that they snapped off rather than endure being pounded back out. I also cut off the protrusion on the end of the trim piece that I had mostly (but not quite) mashed back into place with the hammer. 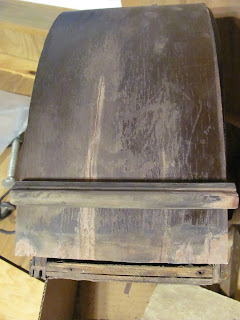 For this photo, I placed the trim on top of the side of the cabinet (of course that's not where it belongs, but I'm trying not to waste pics here). I'd like to finish sanding the trim and the lower part of the cabinet so that I can glue the whole side back together tonight, but I've got a lot of other things to do and I doubt that I'll get around to it.

11/23/13
I worked on the radio cabinet a lot last night. Although I moved it along, some of the directions where I moved were flawed. At first, everything seemed to go well. I peeled the side back to access the wooden mounting blocks around the edges and glued them.


As I was pulling back the side, I noticed that the hole in the top exactly matched the edge of the transformer that's mounted on the side of the speaker. While the side was popped out, someone dropped something on top of the cabinet, like a safe or a piano...which smashed the transformer completely through the 2-ply side. I took a picture of this, but it didn't really turn out.

Then, things went wrong. I drilled pilot holes into the trim and then down through the loose side of the cabinet so that I wouldn't split (or further split, in the case of the base) out everything I was nailing into. Despite using finish nails that were about the same diameter as the drill bit, the nails both grabbed and bent when I was nailing it in place. I had to pull the trim piece off the side and yank the nails out. This process messed up the wood putty that I'd been building up in the divot and it broke a piece of out the inside bottom of the trim.

After I pulled out the nails, I tried it again & got everything working and together. All glued, all nailed in place. Whew. But then I notice that I pulled it a bit too tight and the side doesn't quite line up with the groove in the front panel of the radio. Normally, I'd pull it off and start over, but I thought I'd cause more damage than anything if I tried. The side is close to the groove, but it's just not in it.

After these places dried, I pulled off the clamps and decided it would be a good time to start on the smashed-out hole where the transformer broke through the top of the side. I glued it heavily. My clamps wouldn't reach back that far, so I got a couple of longer pieces of wood, pulled out the waxed paper, and clamped it tightly. 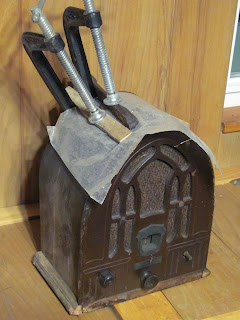 It pulled together as good or maybe a little better than I expected. It's too tight inside the cabinet to be able to work, but after I pull out the chassis, I want to try gluing veneer on the underside to give the top more stability before filling the hole in the veneer from the top.

---
I was hoping to take the chassis out of the cabinet today. Both knobs have screws to hold them in place. As much rust as was on the potentiometers, the screws aren't necessary. The knob on what I guess is the tone control came off easily, but the screw in the tuning knob immediately stripped. Looks like I need to drill this screw out. Sigh.

So, I moved my attention to the dial escutcheon. The bottom nail was a bit loose, so I pried it off, which made it easier to pry off the top nail. I popped both of those nails into a sealed plastic bag before I could lose them. It was covered in surface rust. Thick stuff. I thought I'd need an industrial rust remover to strip it down. But I thought I'd try soaking it in white vinegar for an extended period of time to see if I could remove some of it. After a few hours soaking, I checked on the progress and I could see some gold showing! I pulled it out, thoroughly wiped it with a tissue and it looked good (except that most of the gold was gone).

Now knowing that it was originally gold, I spray painted it gold. I sprayed too thick and it removed most of the detail. So, I wiped the paint off and tried again. A few tries and I got it to the point that the escutcheon was gold without losing much detail. My guess is that the escutcheon was originally kind of a bronzey or "old gold" color and that mine is brighter than the original. But I'm OK with that. I took a few pics of this process...