Boom Box Radio: 6850 1316+ Between running around and doing a few things this morning, I saw an announcement from Boom Box Radio, saying that they were on the air. I ran up to the radio room, tuned in, and had a pretty good signal with fades. This was one of their "Breakfast with Boom Box" shows, which is a fun audience-participation concept: On the online forums, when listeners post their loggings, BBR also asks what you had for breakfast. I'm having a variety of cold cereal, but today's responses on ranged from eggs & bacon to beer.

Happy Hanukkah: 6920 2034-2042* Fair signal. Heard a couple of comedians in front of a live audience. Chime interval signal at the end with clear IDs. I haven't heard this station in probably about 15 years. Wonder if they still QSL or if it was simply an old recording and nothing more?

Radio Gallifrey International: 6925U 2212-2223* Heard just before eating supper with The Who "Who Are You?" and an interesting mashup of the Dr. Who theme and Gary Glitter's "Rock and Rock, Part 2" The SSTV image came out fairly well. 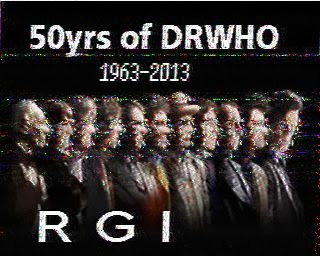 Wolverine Radio: 6935U 0230+ Weak but steady. Weird conditions tonight. Can hear what sounds like old acoustic blues. It'll be interesting to see if the SSTV at the end can be decoded tonight 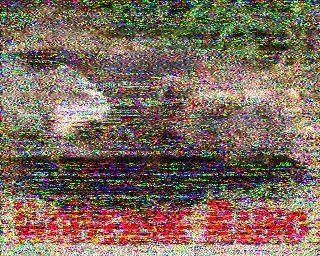 Liquid Radio: 6925 0227-0620+ In and out here with trance music. The signal would fade up and reach downright good levels, then slowly fade down and almost disappear for a while.
Posted by AY at 5:40 AM