Was outside hanging clothes, picking pears, etc. and got my feet wet, so I decided to come inside and check the radio and the computer to see if anyone was broadcasting or testing from Europe to the US. I checked HFU and sure enough, there are some logs of Northwoods Radio:

Northwoods Radio: 6935 kHz USB, 1313+ As I mentioned before, Northwoods Radio's all-metal show on Halloween evening was a lot different from what he often (but not always) broadcasts. Although the Jack Pine Savage does like hard rock and heavy metal, he has a diverse taste and this morning, he's featuring music from Yo Yo Ma's Northern Silk Road project. Also included are some interview bits, so I'm assuming that these bits were from an NPR special or some other feature on the artist. JPS said that he was testing earlier in the morning and propagation seemed good, so he went on. Also, he said that this might be the station's last program for 2013. The station has a beautiful color-printed, 2-sided QSL for 2013 (a different card has been released each of the past three years), so if you're a DXer and like hardcopy cards, this might be your last chance to get this particular card from Northwoods.

My New Underpants: 6925.2, 1400+ Good/VG signal with numerous IDs and the same poem about underpants. This time, though, there is loads of delay, so a lot of the words are repeated several times. Right now, a mid-'60s type song "I Want to Do It with You" and a cover of Hendrix's "Fire"

Unidentified: 6940 kHz USB, around 0440 UTC. Station was on with a nice signal playing "Head over Heels" and some other songs. According to log on HFU, this had been on for about 40 minutes  without IDs...and signed off without an ID.

Earlier in the evening, Rattlesnake Radio sent a couple of SSTV images on 6925 kHz USB. I think this station has only sent SSTV images and has never made any broadcasts. Not positive about that, but I think that's the case. Anyway, here are those images: 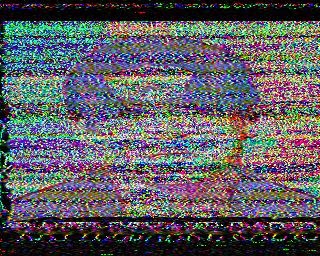 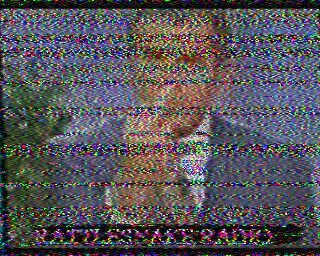