Well, going to a football game took precedence over pirate DXing tonight, but evidently Redhat telepathically knew that I was disappointed that I missed most of his show last night because he's on right now:

X-FM: 6950 kHz, 0236+ Redhat DJing live and announcing the e-mail address for reports and requests. Mostly album rock tonight with "Radar Love" and "When the Bullet Hits the Bone" by Golden Earring and now Robert Plant "Lead Me On." Nice signal here again. Wall of Voodoo "Mexican Radio" (I still haven't gotten tired of hearing that one on pirate stations). Someone requested Dead Milkmen "Peter Bazooka," but this really isn't fitting in too well with the format tonight...this was followed by Toto "Africa"

Red Mercury Labs: 6936.66 kHz USB, 0400+ Playing Judas Priest & telling a story about how he borrowed a cassette of Judas Priest (the "Electric Eye" album, maybe?) and how he played it over & over. Also some talk about cassettes and when you did the wrong combination of rewinding and fast forwarding, the tape would miswind and cause the tape to just stop.

And speaking of metal, I received a QSL for a show from last night. I have a bunch of reports to send out, but it was nice to receive this eQSL already. 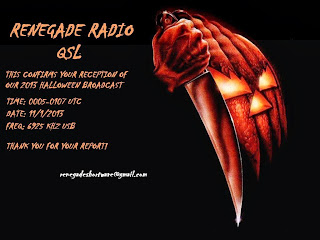